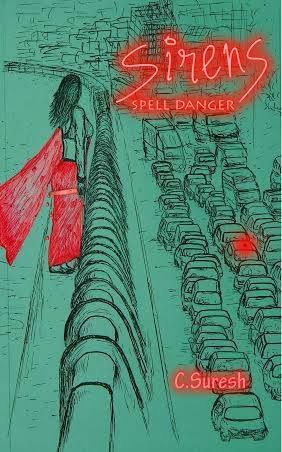 There are sirens and, then, there are sirens. Some warn you of danger and some lure you into danger...Lured by a sexy siren, Vicky is mistaken for a secret agent, kidnapped, tortured and slated for death. Will he survive and save Bangalore from going up in flames?...There is a serial killer loose in the city leaving mysterious messages around the bodies of the victims. Are the messages a challenge to the police or a siren call to lure another victim...Jay is sent to Bellary to investigate a possible ISI plot. Was it merely a murky political plot or was there something more sinister in the offing? And why were two women suddenly singing siren songs of love?...Three tales of nerve-racking suspense and pulse-pounding action.

Review
When I got this book for review, I wondered whether it would be one of those run in the mill mystery novels, which I generally don’t like. On top of that, it is not one, but three stories by three different authors – veteran bloggers, who have joined together to come up with these three stories. An unusual combination – but, intriguing.

Each story, maintained and individualistic and the trademark of the authors. While, ‘Femme Fatale’ speaks of spies and bombings, ‘Bella Donna’ weaves a heart-wrenching tale of a lost, abused soul. The third story, ‘Bellary’ takes you into the world of black magic, holy men and superstition. Together, all three stories form a lethal combination in captivating reader’s heart and mind.

Dear Suresh,
Your story is a true follower of LSD (Love, Sex and Dhoka)  I just loved the character of the female protagonist. I am a bit partial to her rather than the hero. The hero with all his flaws comes out as a winner, but I don’t know why I keep on getting the James Bond music playing in my mind while reading this book. So, in that way, the hero failed to live up to my expectations.
The journey of the hero, from finding the girl in the bar, following her to the terrorist group and  rescuing her in the end all forms an entertaining package.

Reasoning…
The character of our hero looks a bit weak next to the heroine. With the setting and him being interested in the Police academy, I would have expected a bit more action from him. Many would argue with me here saying that you made an ordinary guy do extraordinary things. To them, I bow humbly and say that my generation has been spoiled by the James Bond Movies and I love my heroes as macho men.

Dear Radha,
What a story! If I have ever hated to love a story, your story tops the chart. I would have never guessed what turn the story was going to take, till I did not face the real murderer. The way you have played with the characters, has not only touched my heart will also the sensibilities of a woman. After many years, I am reading a story where I am damn happy with the actions of the villain. More than that, I cannot say about the story without giving it away.

Reasoning
As I have said before, this is one story I would love to hate, but the way it captured me, enthralled me, I cannot but give it a five star. It is truly a captivating story.

Dear Karthik,
One action, one psychological and then you cap it up with a supernatural. What a fitting end to a trilogy of captivating stories. What struck me most about your story was that it had the ingredients of being a full fledged novel. It is too short for me and that is a compliment.:) Though your stories deal with age old stories of Shaitan aka Satan, but the way you have treated this story has been captivating. A true Bollywood style story with loads of imagery. I could almost see the statue and the way you have weaved the background into the story is very picturesque- yet frightening.  I think you meant to achieve that and you got it.

There are parts in this story with came out as a bit too much Bollywood style. For e.g. the scene in the train and the climax. They all will look good in a Bollywood movie:) But on the whole a very entertaining read.

Note from the Reviewer…

The steps, you three have taken in the self-publishing world, is very encouraging to new writers who are looking for other options. The narration of the stories, the imageries and the storyline all have a lot of scope of  turning out to be a full-fledged novels. 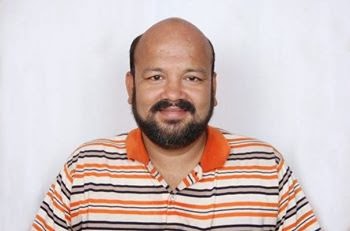 Fiction has been an addiction but the need to make a living took Suresh through Chemical Engineering and an MBA at IIM-Bangalore and, from thence, to a long 16 year stint in the area of finance with specific expertise in fertilizer subsidies and a further two years as consulting expert in the same area. That, in his words, about sums up the boring part of his life, except for the people he was privileged to meet.

Otherwise, he can be described as a mess of contradictions – a bookworm but avid trekker; alone but never lonely; enjoys solitude but loves company; lazy but a perfectionist, the litany is endless. Trekking, which side-tracked him from the writing for which he quit his job, is a major passion and he does, at least, one trek in the Himalayas every year in addition to numerous local treks.

He reignited his passion for writing with a fairly popular blog www.jambudweepam.blogspot.in and, currently, also has a short story – A Path of Thorns - published in a collection “Uff Ye Emotions”. His short stories The Gates of Hell and Yesterdays and Tomorrows have won contests. You can read a sampling of his fiction here. 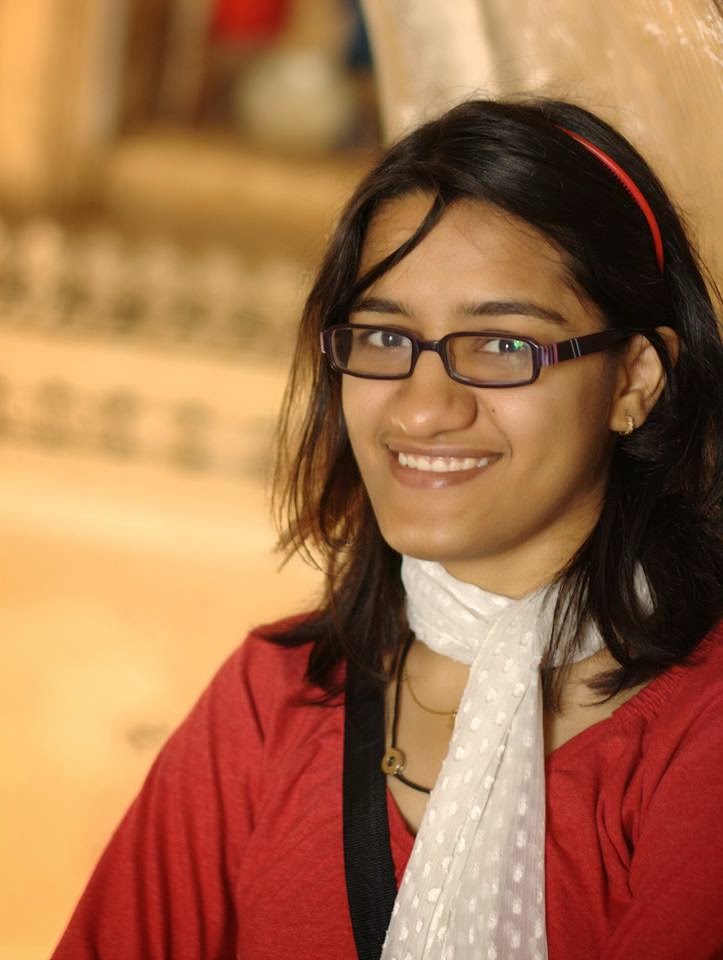 Radha Sawana is part secretive, part playful, part ambitious, part indolent, and as a result, completely confused. She has been a bookworm as far as she can remember, and so it came as no surprise to her when suddenly the thought of starting her own blog occurred her. Thus, in the 4th year of her education in BITS Pilani, she started her blog ‘Entropy’, the name paying homage to her subject of specialization – chemistry.

Entropy began with the random thoughts of her mind and before she realized it, she had started writing short stories too. Her first stories – The Late Goodbye and 48 Hours – were widely loved. Her personal favourite on her blog is her still untitled collection of three short pieces called Harakiri, Saisei and Wind. She is currently writing a seven-part story called Seven. 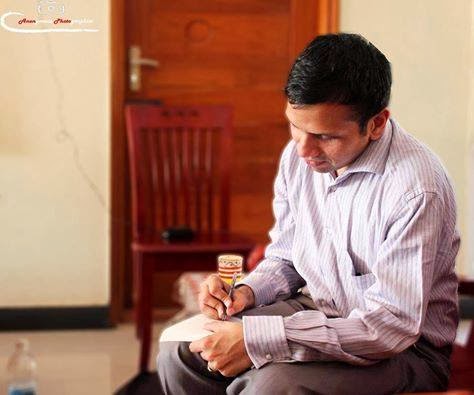 Karthik, a management consultant by profession, has always had fondness for stories from his early childhood when he used to keenly listen to stories told by his grandfather. Over the next twenty five years, he has been voraciously consuming fiction starting with Enid Blyton and moving on to Arthur Conan Doyle and then Isaac Asimov. One fine day he decided he had heard enough stories and he start telling them instead and so he started his blog ‘Lucifer House Inc.’ in 2008. He has been continuously been striving to entertain his readers through his blog posts over 5 years, winning some blogger awards as well in the process. The blog has a Google page rank of 3 and figures in the Top Indian blogs directory.

Do click on these links to check out some of his short stories.

One of his stories ‘Nootropic Egress’ won the best story award under science fiction category in a story telling contests and was published in multi genre anthology ‘Ten Shades of Life’. He has recently started another blog ‘Three Realms of the Mind’ to share his passion for his three favorite fiction genres – science fiction, fantasy and historic fiction with the rest of the world. He dreams of being a bestselling author in one of these genres. Last but not the least, he shares alma maters (IIT and IIM) with some of the most popular contemporary Indian authors and hopes he can share their success in garnering readers as well.

You can Stalk him @

The Girl Child by De. B. Dubois Blurb Growing up as a strong-headed single child with a privileged upbringing in Calcutta, Devi has learned much from her surroundings. Her childhood memories are filled with mixed emotions – especially as she remains angry with her mother and the hypocrisy of women in India. On an unexpected journey home, she encounters reality – new stories and experiences of strangers, as well as friends. It has been years since she left Calcutta, yet the city’s untold stories haunt her. This time Devi is back in town to solve issues and above all, through some painful and hard revelations, to make peace with those she can. Grab your copy @ Amazon.com  |  Amazon.in  |  Amazon.co.uk About the author De.B. is an ordinary person with her daily struggles of being fun and peppy; as all those heavy readings on sociology, philosophy, history, art and culture have done her sombre. – Not that she is co

Double Jeopardy by Sundari Venkatraman The Blurb S anya doesn’t just have trouble, she has double trouble. Twins Arth and Ansh Sharma, are rich, sexy and sinfully handsome – what’s a girl to do? Sanya last saw the twins when she was ten years old. Now, all grown up, she has come looking for gentle Arth, the twin she has loved ever since she can remember. But instead, she is confronted with fiery Ansh, who is hell-bent on seducing her. And what’s worse, she can’t seem to stop herself from responding to him. As she chases Arth and is chased by Ansh, Sanya finds herself on a crazy roller coaster ride with no way of getting off. How will she deal with these two very different men in her life? Will she be able to convince one twin that she loves the other? Review Disclaimer: I have done this review based on the original version bought from Indireads. The book has undergone some editorial changes after this review. But it no way affects what I feel about th

The story began with a lot of promises to take a reader through a roller coaster ride of intrigue and happenings. I was ready to be thrilled and horrified. What I was not read ready for was the weaving of characters that sounded so real that I found this book unputdownable. At least for me. The prologue of the story gave me creeps. I could almost hear Chuckie talking to me. Imagine understanding the thoughts of a two-month-old and not being freaked out by it. The story follows the life of Payal Chatterjee as she gets involved in the scheme of a madman. I loved the way the place has been described with trains and wilderness. I could almost imagine the scene as Payal ran through them as the golden masked man followed her. Goosebumps. Another character that stayed with me was Rudolf. I am not writing the last name since I can’t even pronounce it. The negative shades that were created in most of the characters left an impact throughout the story. Don’t read this book looking fo